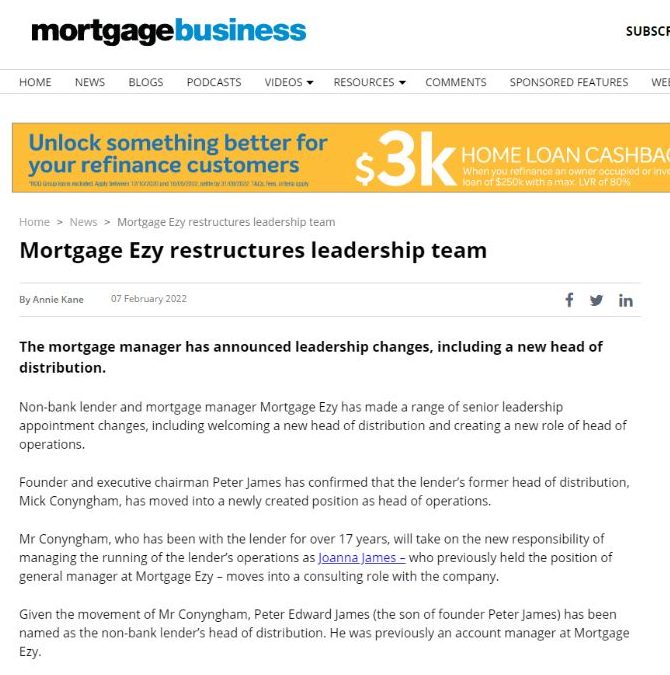 The mortgage manager has announced leadership changes, including a new head of distribution. 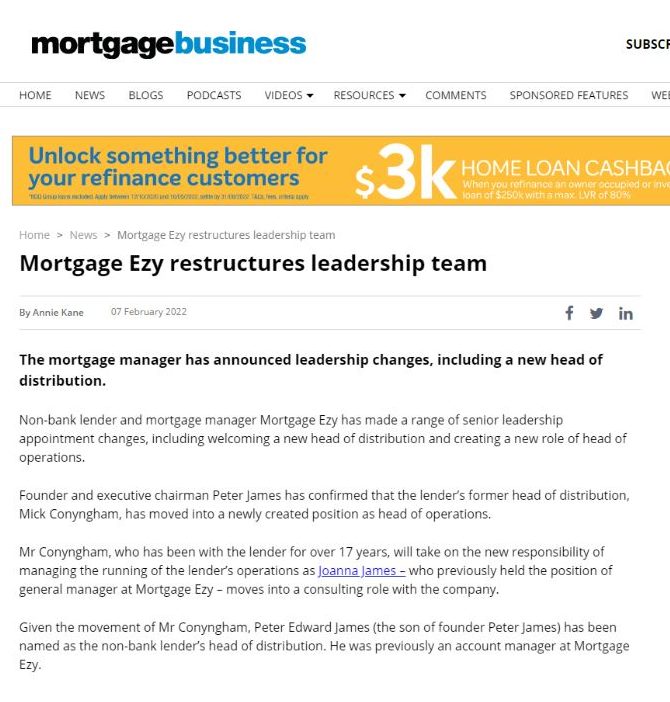 Non-bank lender and mortgage manager Mortgage Ezy has made a range of senior leadership appointment changes, including welcoming a new head of distribution and creating a new role of head of operations.

Founder and executive chairman Peter James has confirmed that the lender’s former head of distribution, Mick Conyngham, has moved into a newly created position as head of operations.

Mr Conyngham, who has been with the lender for over 17 years, will take on the new responsibility of managing the running of the lender’s operations as Joanna James – who previously held the position of general manager at Mortgage Ezy – moves into a consulting role with the company.

Given the movement of Mr Conyngham, Peter Edward James (the son of founder Peter James) has been named as the non-bank lender’s head of distribution. He was previously an account manager at Mortgage Ezy.

Speaking of the leadership appointment changes, the founder of Mortgage Ezy noted Ms James’ move out of a full-time role with the company but highlighted that she would be contracting to the lender over the “transitional period” as Mr Conyngham takes on the mantle as head of operations.

“Given Joanna’s own business commitments have been escalating, she will be moving into a consulting role with Mortgage Ezy and helping us in that transitional period,” Mr James told Mortgage Business.

“We are really looking forward to seeing the exciting thing that she’s doing in the public speaking arena and with her work on [female empowerment] moving forward.

“Mick will now be moving into head of operations so, if anything, he’ll be an even more pivotal appointment than even before.

“Stepping into head of distribution is that familiar name, Peter James [Junior], who has been very successful as a BDM and who has been living and breathing the company since he was a teenager. So he’s been really working with us for now for 18 years.”

Other movement changes at the company include that of Alex Micallef, former settlements manager, taking up the responsibility of credit manager, with Alison Forrester filling his old position.

The appointment changes come as the team behind Mortgage Ezy launches a new lender, Source Funding. While the new non-bank lender is currently only available through Mortgage Ezy (and has a program of $400 million supported by “two of the major providers of warehouse facilities in Australia”), it is expected to operate as a separate lender and brand from next year.

You can find out more about Source Funding on our sister brand The Adviser.