Mortgage Ezy claims their place at the elite lenders table, winning Australia’s best non-bank for the second year in a row! 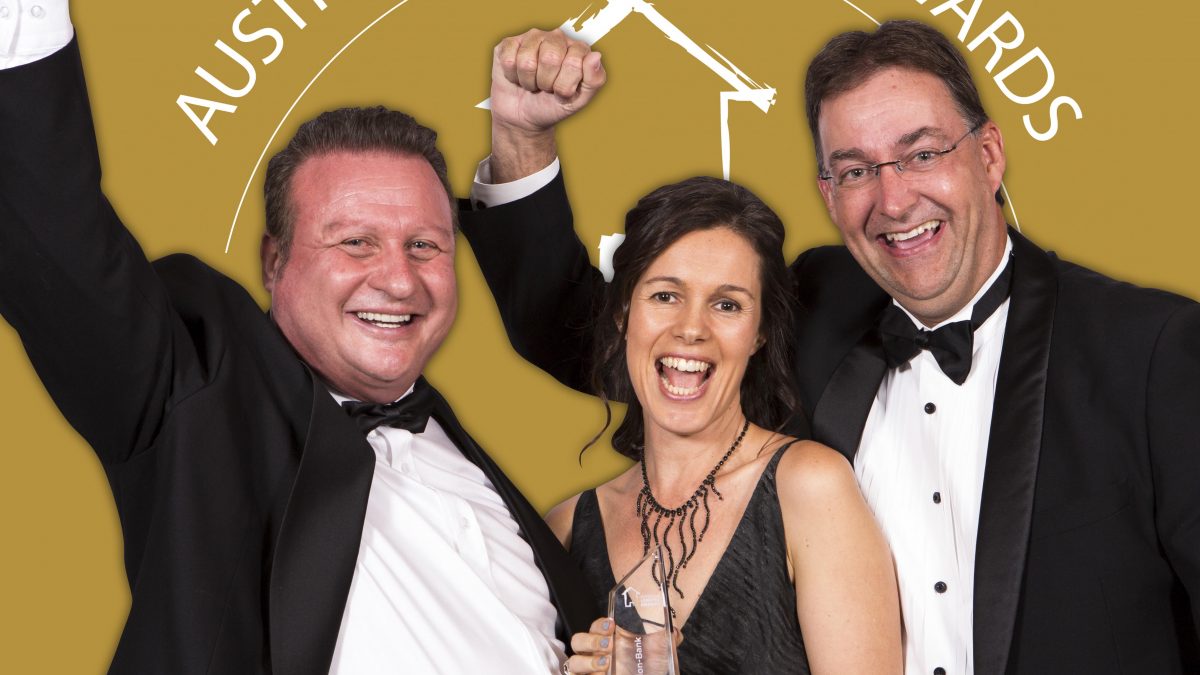 Mortgage Ezy has long been perceived as the disrupter of the status quo. Now, the company has come of age, winning the Best Non-Bank Lender award at the 2016 RFi Group Australian Lending Awards and, shocking the industry once again, being voted top Non-Major Lender for NSW, ACT, SA and NT at the MFAA Excellence Awards. We speak with the company’s driving  force, Chief Executive Peter James, in the aftermath of its victory over household names such as Macquarie, Suncorp, St George and ING Direct, on how Mortgage Ezy won this ‘David and Goliath’ contest, and on brokers, the industry in general, and what the future may  hold. Volumes also doubled, then in 2016 they doubled again – rising to record levels. While Mortgage Ezy has seen a tremendous number of brokers trying to gain access to it, the lender  is only able to accredit a fraction of these, since the company has a longstanding policy of exclusivity, not wanting to have its loans on every aggregator panel so as to give its brokers an edge.

James suggested that as well as enjoying ease of service and competitive pricing, his brokers are able to capitalise on the perception that they are offering a loan to their clients that is not easily found elsewhere.

“We want there to be dinner party conversations such as, ‘My broker helped me secure an exclusive product not available with the banks, giving me a great rate with all the bells and whistles’,” James said. 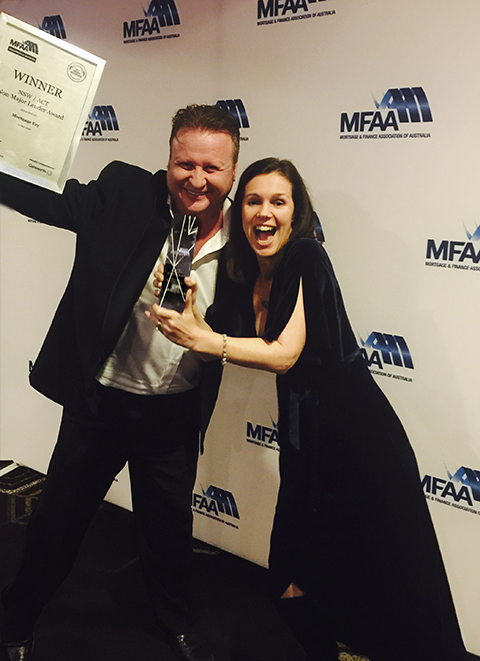 Peter and Joanna James at the Sydney MFAA Excellence Awards

“Our brokers tell us this point of difference elicits strong referral and repeat business for them,” he added.

Non-banks are generally the lenders that position themselves as bringing the fight to the big banks, but in terms of actual volumes and distribution footprint, perhaps it’s time for a paradigm shift in how brokers view this competition.

In the year ahead, James explained, Mortgage Ezy will further expand its reach by strengthening its proposition to brokers.

The company has almost completed a technology upgrade, which is already yielding results – including pulling out the odd miracle when required.

For example, in the past, the company could not have contemplated settling a loan in just over a day after the loan application was submitted.

“We broke our record, settling the most urgent deal in just 28 hours, assisted by our state-of-the-art So Ezy system,” James said.

Mortgage Ezy has several further enhancements planned for the year ahead, most focused around innovative lending and better B2B with its Business Partners.

One of Mortgage Ezy’s main focuses is on helping its brokers build their businesses. Our job is to make the broker look good, and to make that service experience seamless and smooth, delivered as fast as we can, James said.

“It’s all about service, it’s about the people,” James said. “The advantage we have over the bigger banks is we are not a factory line. Statistics show an average broker settles just over $1 million a month so every deal is important for them and their clients alike.

“Ours is a genuine partnership where all brokers are catered for regardless of volume. Those with high submission quality are given an extra premium service as are volume writers equally, with access to assessors made available rather than only focusing on the elite of the industry.

“We also look at arrears, conversions and growth rates when assessing our brokers, making sure we reward quality with our Priority Programme,” James said. “All of our brokers are further supported by account managers who are very experienced lenders themselves who can workshop a deal and understand why it might not fit the cookie-cut mentality of the mainstream lenders.

The big guys are quite simply too rule-based – not willing to go outside of the norm,” James said. “We’re much more flexible and always willing to think outside the box.”

Since 2015, brokers have realised they need to safeguard their businesses in this ever-changing lending environment. The shift in the home loan landscape has opened up massive opportunities for non-bank lenders like Mortgage Ezy. More and more brokers are now offering an alternative to their customers, driving these niche lenders’ volumes.

“In the past, many employees left a bank and became brokers themselves but tended to write loans for the institutions they parted ways from as it was comfortable and a known factor,” says James.

“Some brokers have developed bad habits in making certain banks their default position and that is no longer viable with the changing policy requirements over the last year. Brokers now need to rework scenarios and servicing regularly – comparing non- banks with banks – because a lender which previously might have been the best for servicing in a particular scenario might be the worst now.”

Letting go of past complacency and bias will be a challenge for brokers– yet it appears essential since 2016 will be further characterised by rapid change and complexity, together  with an expected slowdown in the residential real estate market now the election is past.

“We’ve already started the year with the first shock of lenders refusing non- residents, and these brokers may need to reinvent themselves by developing inroads into the local market,” James said. “Many are seeing that Mortgage Ezy can provide them the edge in doing this.

“After the regulatory changes that occurred in 2015, brokers who embraced non-bank lenders, such as Mortgage Ezy, dramatically improved their customers’ chances of being eligible for a loan on the best available terms,” he added.

And yet, despite the obvious growth in brokers’ use of non-bank lenders, third-party awareness of alternative products is not anywhere near where it should be – and this is what James believes is one of the biggest threats to the industry.

“You go into any broker group and, unfortunately, they tend to write the bulk of their business with only a handful of lenders – and that’s a big risk,” he said. “What they should be doing is ensuring they have the skill set and understanding of what multiple lenders have to offer in order to maximise every opportunity. Brokers also need to ensure that when they turn a customer down for a loan, they are 100 per cent sure the customer is not eligible for a specialist product. This not only will mean up to 20 per cent greater revenues, but increased referrals and an enhanced reputation in the market.”

Brokers are not going to be competitive if they treat their clients as a transaction, and to prosper they need to build their value proposition in the market. This means leveraging off the reason why brokers first began taking market share, which James believes was because of

banks’ “treating their customers like a number rather than an individual, failing to understand their needs and to provide adequate service accordingly”.

“The lack of rapport banks still have is their Achilles heel, and brokers need to use this to their advantage to be successful,” James said.

With uncertainty swirling around the economy and the political landscape, this can seem a worrying time for brokers. Further regulatory scrutiny is going to come into play during 2016 – in particular, ASIC’s review of broker commissions, which is adding to uncertainty and leading some to question the sustainability of the industry, with any reduction in remuneration perceived as a major impediment to the further growth of brokers’ share of the pie.

Brokers who provide a genuine comparison across a wide range of lenders, rates, features and requirements then tailor a solution to the client’s individual needs will always be in demand.

Consumers today are more confused than ever by the complexity of the market, which means brokers have a much stronger value proposition and with market uncertainty, they are well placed to help clients make sense of an ever-shifting financial landscape.

However, as ASIC looks specifically into broker remuneration structures, James, for one, believes brokers must be adequately rewarded if they are to continue to provide excellent service and value to their clients. While brokers have for a long time been required to be clear about the revenue they earn for providing services, it is a huge leap to move to a fee-for- service model as some have suggested.

A commitment to brokers

Both AFG and the MFAA have put on record that they believe a fee-for- service model will significantly reduce competition in the mortgage sector, to the detriment of the consumer.

James and Mortgage Ezy agree wholeheartedly. Aggregators, including AFG, have also expressed concern over market distortion by bank- owned aggregators if commissions are abolished. James concurs and argues that vertical integration is a much bigger risk for the consumer since many brokers continue to be locked out from being able to use lenders such as Mortgage Ezy by bank-controlled groups.

Comparing Australia with the mortgage industry in New Zealand and Britain – in particular where trail is not payable and remuneration is much lower overall – it becomes quite apparent that the quality of service is much lower than is delivered here as a result.

In particular, while trail is unique to our country, it results in all interests being aligned, whereas a pure upfront model encourages brokers to churn clients to the detriment of everyone.

Mortgage Ezy has been totally committed to the broker channel since opening its doors in 2001. Ultimately, the lender’s reliance on brokers is reflective of consumer preference, with broker-originated loans now accounting for more than 50 per cent and increasing.

“As more and more customers vote with their feet,” James concluded, “we are determined to continue working hard in the background to enhance brokers’ businesses and justify their recommendation of us to their clients, as we believe the best way to deliver tailored, individualised personal service is to work with brokers hand in hand”.